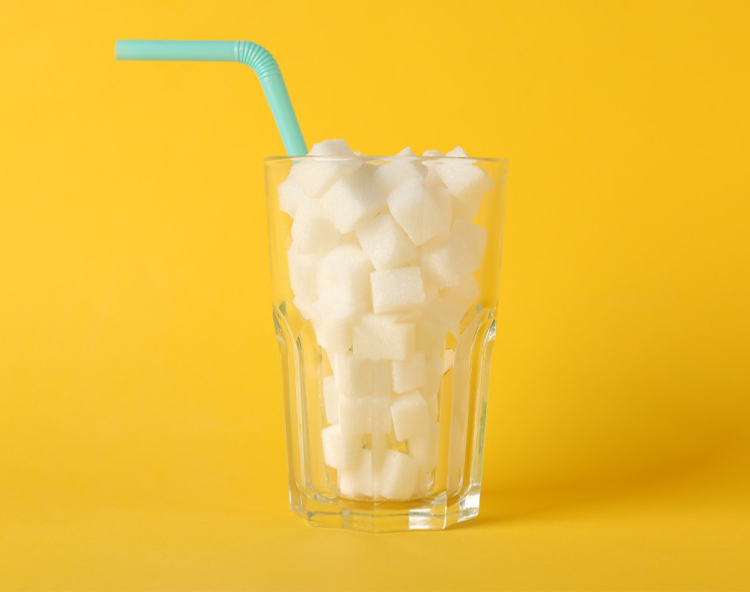 Over the next few issues, we’re going to get into the detail of the primary taste elements associated with cocktail creation, namely: sweet, sour and bitter (sorry salt and umami lovers). We will explore what they are, work through the exact purposes they serve, and find out how best they can be employed to elevate your mixed drinks to the next level. There’s really only one place to start, and that is with the that sweet little thing we call sugar. In our craft, sugar is without a doubt the most important taste element. It is also by far the most widely utilised. And, commonly, the most misunderstood. Sugar serves multiple purposes in cocktails. Most obviously, it adds sweetness, but it also adds body and texture. It can be used as a preservative to enhance the shelf life of fresh ingredients. It is water soluble so can be transformed into easy-to-use syrups. It can absorb hard-to-extract flavours such as citrus oils, but most importantly of all sugar carries flavour. I know I’ve said this a few times already in my previous pieces but it’s worth repeating as this fact is often overlooked by

THE UBIQUITY OF SUGAR

Have a think about all the cocktail recipes you know; I’ll bet nearly all of them include a sweet element of some sort, either in the form of a syrup, liqueur, or modifier. I’d go as far to say that well over 99.9% of all the recipes out there do, and in fact, off the top of my head, I can only think of three well-known cocktails that don’t contain any sweetener at all: the Dry Martini Cocktail, the Mizuwari and the Vodka Soda.

Before you @ me on any of these drinks, I know there are slight issues with all of them

So, why am I highlighting them? Well, aside from being the only ones I can think of (if you know any others, please let me know in the comments section below), they all rely on triggering our trigeminal sensations (temperature, texture, intensity etc.) over their flavour to make them enjoyable. While all three of course need to be ice, ice cold, they are also dependent on their alcoholic and textural intensity:

In short, cocktails that do not contain a sweet element of any sort are characterised far more by their trigeminal qualities rather than their flavour. Why? Because – let’s say it one more time, with feeling – sugar carries flavour.

I’ve sat through countless menu development sessions over the years, tasting and tweaking the cocktail offerings of my teams to get them to the stage where they can go on the list. In this process, the one thing I’ve noticed above all is that there is a reluctance among modern bartenders to use the appropriate amount of sugar in their cocktails. There are numerous reasons for this – the demonisation of sugar from a dietary perspective being a common and valid one. But I think the primary driver, which is often in no small part down the ego of the creator, is worrying about making drinks ‘too sweet’., There is a mindset that sweeter drinks lend themselves better to an ‘unrefined’ palate, therefore bartenders want to demonstrate their taste maturity by making drinks which are sharper and dryer. There is, of course, some truth in this: as we age our palates and flavour preferences change. However, rather than improve the flavour, cutting back on sugar in fact has the opposite effect of decreasing flavour intensity and offsetting balance. Many bartenders I’ve worked with, when trying to fix an unbalanced or insipid creation, will often take to adding more and more ingredients or employing different mixing techniques in search of a solution, making their drinks increasingly complex and difficult to make. Nine times out of ten all they need is one extra bar spoon of sugar syrup. Sugar, when used correctly and in sync with other taste elements, should not present itself as sweet, it should be balanced, harmonious, and fulfilling its primary role as a flavour enhancer.

To best demonstrate this, we need to do a little experiment, one you can do at home. You will need:

First off, I want you to taste each component individually, a tiny sip will do. The syrup will be sweet, the lemon juice will be sour, and the water will, well, be like water. No real shocks there. Next, I want you to pour them all into one glass, give them a quick stir, and taste again. What do you get this time round? Well, all things going to plan, you should be hit with the overwhelming flavour of lemon. So why couldn’t we taste the flavour of lemon in the lemon juice? The interesting thing is that while the lemon element was there all along in the form of aroma molecules, it just didn’t have a vessel to turn them into flavours. Lemon juice does of course contain some sugar (about 2.5 grams per 100 grams of juice) but not nearly enough for it to have a meaningful flavour when consumed alone. That’s where the sugar comes in and works its magic.

Sugars, in their simplest form, are short-chain carbohydrates that our bodies use for energy. These carbohydrates are naturally occurring molecules, found in all types of food. They are made up of different arrangements of hydrogen, oxygen, and carbon, and the four we are going to focus on are:

There are many natural products that we think of as sugars – such as muscovado or palm sugar – which get their distinctive flavour from the raw ingredients from which they are sourced. There are also synthetic sugars – like the much-maligned aspartame – which have been developed to serve specific purposes in the food industry, but we’ll leave these for another day.

INTENSITY, LENGTH, AND THE GENIUSES AT CRUCIBLE LONDON

Why is this important? Good question! Each of these sugars has a different intensity of sweetness and also differing length of time that the sweetness lasts on the palate. Understanding both how sweet they are and how long that sweetness will last in our drinks is crucial in choosing the right sugar for specific cocktails. Luckily for us, my good friend Stu Bale, founder of the world-renowned creative agency Crucible London and all-round drinks genius, has done a huge amount of work in the study of sugars, and has created this handy graph that explains it far better than I could hope to.

As mentioned, the problem with using high-fructose sweeteners like honey or agave syrup is that while they have an incredible flavour of their own, when we use them in cocktails their sweetness spikes early then dies off, meaning that both their flavour and the other flavours they should be enhancing, will die off as well. An easy way to combat this is to cut them with caster sugar syrup. This will allow the honey or agave to take on the lengthening quality of the sucrose, but crucially won’t dilute the flavour as the sucrose will serve its primary role as a flavour enhancer. This is a more manageable and easier way to use syrup, and on top of that reduces the cost, allowing you to use more expensive and exotic ingredients without compromising on flavour quality. We can take this even further and apply it to nearly all classic cocktails (as well). The most innovative use of sugars I’ve encountered was by Marcis Dzelzainis, founder of Idyll Drinks, while he was working at Mission in Bethnal Green, London, many years ago now.

Marcis used sugar like a chef would use stocks, using different types with the additions of tiny amounts of ‘seasoning’ to boost and enhance the signature flavours of his cocktails. He made two varieties of sugar syrup, one for citrus-led shaken drinks like Daiquiris and another more suited to stirred-down classics such as Old Fashioneds. It was revolutionary at the time but if you think about it, it makes perfect sense; why should we use the same type of sugar syrup for such wildly different styles of drinks? Both his syrups serve the same overall purpose of sweetening and carrying flavour, but they do it in a different way. His ‘Bright Syrup’ for Daiquiris and the like was a mix of fructose and sucrose, with a tiny amount of orange blossom to act as a seasoning element. It gives an initial intense hit of fresh sweetness from the fructose that then lingers, allowing you to boost the citrus content to balance the increased sweetness, leading to a fresher, brighter cocktail. His ‘Dark Syrup’ for stirred down style drinks combines sucrose with a small amount of maltose and a tiny hint of vanilla. This is perfectly suited to stronger, dryer styles of cocktail as it dramatically lengthens the flavour but without increasing the sweetness, leading to an incredibly elongated flavour profile that is simply not achievable with conventional sugar syrup. I think we can agree there’s much, much more to sugar than just the sweetness. Next time round we’re going to go in depth on our sour senses, and see just how important acidity can be.