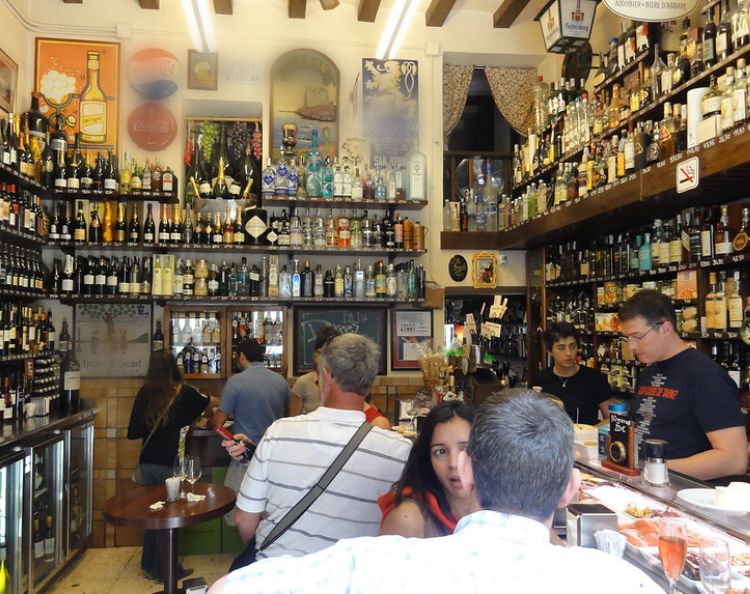 The Catalonian capital is filled with award-winning bars famous around the globe. It’s also home to one of the richest, most varied traditional bar scenes in the world. It’s the big event of the fall: on October 4th, for the first time, World’s 50 Best Bars will hold its annual gala outside of London. Barcelona is the lucky city, and the best and brightest of the global cocktail scene will come to town. There will be guest shifts and take over, and everyone will want to visit Paradiso, Sips, Two Schmucks and countless other premier venues. But if you look beyond headline-grabbing spot, you’ll see that the strength of Barcelona lies in its old-school bars, well beyond cocktails – and these places are at the heart of their community.

Barcelona’s drinking scene is quite unique in that it hosts a handful of cocktail bars that have been in continuous operation for almost a hundred years —and we’re not talking about hotel bars! One of them was in the news recently: Boadas, first opened in 1934, was recently bought out by none other than cocktail legend Simone Caporale. Caporale promises to change very little to this iconic, diminutive bar where fans of classic cocktails served the classic way will find much to love.

Founded by Cuba-born Miquel Boadas, the bar was for decades, the only place where the now very trendy ‘throwing’ technique was kept alive. Bars don’t just serve drinks: they sometimes safe-keep valuable traditions. And Boadas is not the only age-old cocktail bar around town: Ideal, for example, is almost as old and still a haven for amateurs of no nonsense, mixed drinks.

Wine with stuff in it

If you want to forget about cocktails for a minute or a two, Barcelona has got you covered. Ever since Flaminio Mezzalama, the local Martini distributor in the late 19th century, made vermouth trendy, the city’s thirst for aromatized wine has been insatiable.

For decades, no self-respecting neighborhood bar could have done without a barrel of house vermouth, served on tap.

The intense modernization that followed the 1992 Olympics almost killed this longstanding tradition, but some bars survived. One of our favorites is Quimet y Quimet, opened in the Poble Sec area in 1914.

Thankfully, the resurgence of vermouth over the last decade has meant the survivors have been joined by many new ‘vermuterias’, such as the hipster friendly Morro Fi or the delightful Senyor Vermut. Of course, you can also grab a bite at any of those places —and Senyor Vermut has been regularly highlighted for the quality of its ‘patatas bravas’.

Catalonia is a grape-crazy region. It produces some of the best wines in Spain so its only logical that its capital would be awash with great wine places. Usefully enough, El Born, the neighborhood with the highest density of cocktail bars is also packed with wine bars. Can Cisa and L’Anima del Vi are particular favorites for natural wine lovers, but if you’re looking for tradition, Xampanyet is the place.

Opened since 1929, this place looks exactly like a 1929 tapas bar. It’s got great food and loads of charm. But its really distinctive feature is the house wine, a semi dry bubbly from Girona (a city north of Barcelona).

It’s not a champagne, it’s not a cava, it’s… xampanyet. You won’t drink this anywhere else, which is reason enough for a visit (but please do stay for the anchovies).

Does a city loses its essence when its historical bars and restaurants close? It’s quite obvious that without Xampanyet, Quimet y Quimet or Boadas, Barcelona wouldn’t really be Barcelona. A few years ago, many locals mobilized to save the Marsella, an almost two hundred years old bar in the Raval neighborhood (near Two Scmucks) that was about to be sold by its owners. The activists thought its closure would be the death knell for the area. Local authorities listened: in 2013, the city of Barcelona bought the whole building and saved the bar.

The Marsella is like a time capsule: if you were to shoot a movie sequence set in a 1850 Barcelona bar, you’d be inspired by this place. As some have commented, the accumulated dust (and it’s very, very dusty) is probably as old as the bar itself.

But taking photos of old bottles that haven’t been scrubbed clean in decades is not the only thing you do here: at the Marsella you drink… absinthe. Since the green fairy was never banned in Spain, this maybe the oldest absinthe bar in the world. Obviously, tread carefully: this is an explosive drink. We could have gone on and on with more old-school bars. This is one of the joys of spending time in Barcelona. It’s true that some are threatened by rising rents and market pressure but it seems there’s growing awareness of the treasure those places represent. And even cocktail people understand that: a few months ago, the 1907 Cafè del Centre was saved by the co-owners of Paradiso and Dr Stravisnky. They didn’t decide to transform it into a modern cocktail bar: they just made sure the restaurant / bar would keep doing well what it had been doing well for a century and made the necessary improvement to keep it going for (we wish) another century. Because they know that the bars that will be celebrated at the 50 Best Bars ceremony are just standing on the shoulder of the giants that preceded them, those who made of Barcelona such a great city for lovers of a good drink. ———— The views and opinions expressed in this article are those of the author and do not necessarily reflect those of Freepour.