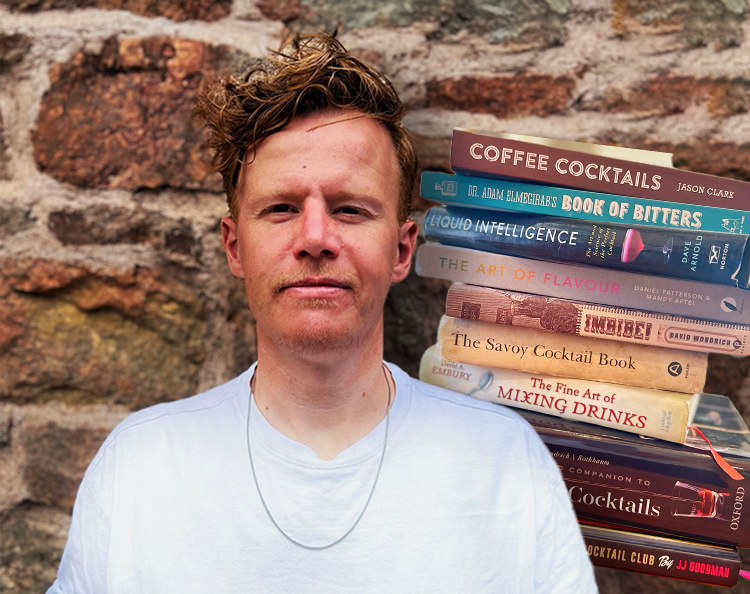 I’ve always loved cocktail books. I used to adore cocktail books, but recently I’ve been unable to shake the feeling that cocktails are much more than just words in a book. As a young bartender, I would spend countless hours nerding out on the endless recipes in old masterpieces like The Savoy Cocktail Book or Professor Jerry Thomas’s Bartenders Guide, captivated by the creations of these mysterious, other-worldly bartending legends. At work, my colleagues and I would trawl through the slightly less mysterious but equally as important Difford’s Guides, feasting on the images of more contemporary creations from around the world and deciding which ones to try out on willing guests. In recent years, however, my interest in learning recipes has diminished, but the joy I take from creating my own is as strong as ever. I started bartending in 2004 aged 18. My early obsession with classic recipes was as much to do with the delight brought by the smells and tastes of recreating them, as it was with the social currency that came with being able to recite them at will. I would visit cocktail bars not only to explore their menus but also to engage in debate with the bartenders over the recipes. Looking back now, I was focusing on the wrong information.

The Whisky Sour That Changed It All

It was on one such visit that I had the epiphany that led me here today. Sat, in what was at the time the best bar in the world, I worked my way through a few of the standout menu drinks and they were, without exception, incredible. Each one was executed with impeccable skill and precision, these were true works of art, and this place was truly worthy of its accolade.

The issue came when I ordered a simple whiskey sour. Upon arrival, it certainly looked the part: bright and fluffy, in a frozen crystal glass with an artistically trimmed lemon zest; my anticipation was high, and perhaps that was the problem. On tasting it, while it was by no means the worst cocktail I’ve ever had, it was watery and unbalanced, lacking depth and character, and with slightly oxidised lemon juice. My lofty expectations were brought back to earth.

Was I disappointed? Yes, a bit. Did it dampen my experience? Not much. Did it lessen my respect for the venue and the people behind it? Of course not. But it did get me thinking… Why do we make bad drinks? Especially classics?

The Read and Repeat Method

This visit made me think back to my own experiences of learning new menus. More often than not, I was just given a specs sheet and expected to go commit the recipes to memory. Sometimes, but not every time, I would be walked through the recipes step by step by someone familiar with them, and on rare occasions, I would actually be able to practise making the drinks without having to immediately serve them to a guest. Gradually, over time, muscle memory would kick in, and the recipes would be engrained in my brain. This is how, I’m sure, 99% of bartenders in 99% of bars operate. It is obviously a proven method of training and learning. But is it the best way? When the primary objective of the venue is to be a conveyor belt, serving as many drinks as possible with maximum consistency, it works just fine, but that is reliant on all variables being consistent at all times, which we all know in hospitality is very rarely the case. The flavour profile of your citrus juice will change throughout the course of a shift, ice will lose its integrity the longer it is left in the well, and your sugar syrup may have been made to the wrong ratio. Any number of ingredients can change beyond your control, and without an understanding of how each of these elements works in isolation, it can be incredibly difficult to adjust the recipe to account for these inconsistencies. The struggle can be compounded further when the drink in question is an off-menu classic. When making the same menu drink, again and again, the flavour profile is front of mind, so the palate knows the profile you are trying to create, but if you’ve not made the drink for an age, or only ever encountered it on the pages of a cocktail book, the task can be nigh on impossible – anyone who’s tried to pronounce ‘Curacao’ correctly after only reading it in a cocktail book will know what I mean. With experience, our mind and our palate learn how to add the quick fixes required, but the capacity for problem-solving takes time to evolve, and for a young bartender who has simply been presented with some recipes on a page this can be a daunting task to undertake. Without knowledge of the place, time, intention, or emotion behind these drinks, and without consideration to flavour profiles of historical versus modern ingredients, or the modern palates of the people drinking them for that matter, they can easily fail in their primary objective – to bring joy! The reading and repeating method of learning cocktails fall further when it comes to what – for me – is the most enjoyable part of making cocktails – creating your own recipes. A database of classic recipes and twists can provide good inspiration, but not necessarily the know-how to make your own creations. Being able to build an Ikea bookshelf does not make you a master carpenter. To work out the best way to train and learn cocktails, we need to appreciate exactly what they are.

Cocktails are art, plain and simple! I’d go further and argue that they are the purest form of culinary art out there. But instead of training artists, we’ve trained a generation of art historians.

Cocktails, good cocktails anyway, can stand up against any artistic medium when you think about it. They are a collection of elements, in this case, our ingredients, that when combined make a whole that is greater than the sum of its parts, that is then consumed purely for our enjoyment. Just like the musician plays notes in a particular order to make beautiful music, or the painter adds colour to canvas to create their masterpiece, the bartender works with tastes, flavours and textures to produce their art. Cocktails are equally complex as any other artistic medium out there, in fact, I would say they are one of the most complex forms of art as they play to the majority of our senses, simultaneously stimulating sight, smell, taste and touch. So, if cocktails are art, why do we not employ an artistic approach to teaching them? If I am learning to play the guitar, I do not start by playing Stairway to Heaven. First, I would learn the chords, strumming each string to produce notes. From there, I would learn how to combine those notes to make simple melodies. Then after a lot of practice, maybe, just maybe I could play something resembling Stairway to Heaven. Thankfully cocktails are a lot easier than playing the guitar, but that doesn’t mean we shouldn’t follow the same approach to learning them. In the case of cocktails, our ‘chords’ are ‘taste elements’ – elements we can physically taste on our tongue, namely: sweet, sour, bitter, salt and umami. These elements are the building blocks of flavour, and an understanding of each in isolation, how they work when combined together, and the physiological responses they trigger in our bodies and minds. These act as the vessel to carry flavour, but must be supplemented with texture and temperature to truly create cocktails that can be considered works of art. Traditional cocktail recipe books teach us the what, not the how or why – how to make good cocktails and why our bodies are programmed to enjoy them. Recipes detail the precise proportions of the ingredients but not why each one is present and what purpose it serves. In future articles we will explore taste and flavour in detail, focusing on how our bodies and minds process the information held in them and how they can be harnessed to produce truly world-class cocktails every time. I’m not saying you shouldn’t read cocktail books, in fact, I think you should read as many as you can. Devour them, geek out on them. I just don’t think they should be the primary training tool for bartenders learning the ropes. Cocktails are much, much more than just words in a book. ———— The views and opinions expressed in this article are those of the author and do not necessarily reflect those of Freepour.