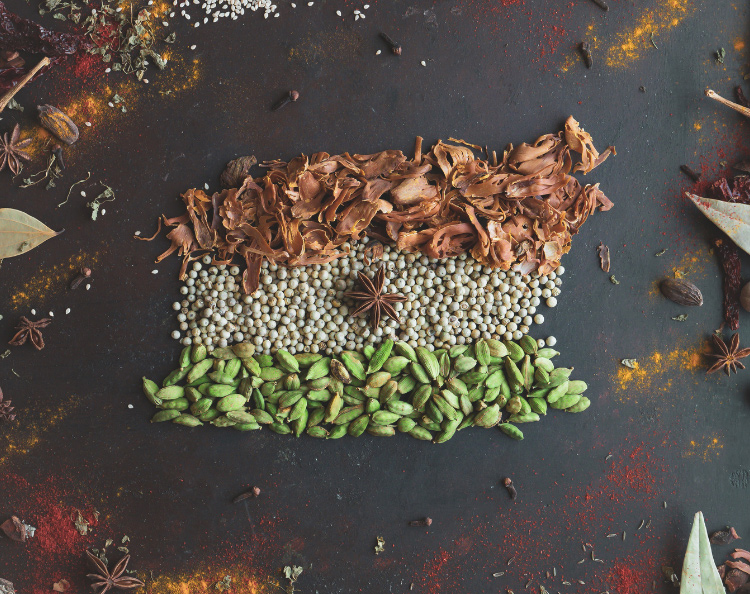 What is the very first thing that comes to mind when you think of Spices? India or Indian food? If the same question was flipped the answer would most definitely be Spices too. It goes without saying that no meal can be complete without the use of spices. Even the movies haven’t been spared! The Hindi term for spices – masala – has become a figure of speech indicating excitement or spicy, a sort of razzmatazz. India has a rich history and is diverse in every sense and meaning – the land, the climate, its geographical position, tribes, customs, rituals, food – the list can go on for a mile. To understand how all of these came to be the key identifiers of India, we must go back a few centuries.

Spices, a now rather mundane and overlooked part of our lives, played an integral role in shaping India’s history. India is one of the three oldest civilisations where there is evidence of the usage of spices dating back to B.C. (before Christ). In fact, the use of spices will be found in the Vedas – the sacred ancient texts. Interestingly, during the Middle Age, Indian spices were of enormous value – it is believed that a sack of pepper could be equated with the worth of a man or a few livestock and that is how black pepper came to be known as black gold. It was this demand for spices that triggered expeditions across the seas; the most well-known story being that of Vasco Da Gama who reached Calicut making his way around the Cape of Good Hope by ship. This enabled the West to begin what would turn into centuries of colonialism and imperialism in India. The Portuguese laid the route to Spice Trade in India, then came the Dutch and then the British. The spice trade powered the exploration of faster routes and helped tip the balance of world power.

Importance & Use of Spices

The Indian subcontinent’s geographical, topographical and climatic features supported the cultivation of varied spice plants – making the country a lucrative region for trade and consumption. However, not all spices originated in India. The spice box that India is today is the result of decades of foreign traders and conquerors bringing different seeds, roots and plants onto Indian shores. The original native spices are the long pepper, turmeric and varieties of cardamom. However, nutmeg and mace were said to have come from Indonesia and saffron from West Asia. Spices have been sought after not only for the flavour they impart but also for a plethora of other uses in medicine, preservation, embalming, extracting the essence, aromas and even the combined uses of these. Pepper, for instance, has medicinal properties in healing digestive problems, turmeric rapidly stops bleeds, and fenugreek aids digestion and its sweet flavour is a great mouth freshener.

When in the national capital, a visit to the most well-known spice market, Khari Baoli, is a must. Although Old Delhi is a maze of lanes, one need not try hard to find this market. The aromas of all the different spices hit your nose from a mile away and when that happens, you know you’re in the right place! A visit to this market is an experience in itself where you will not only find heaps of spices, but also old stores run by generations of families selling their own extracts, essences and perfumes. The Malabar Coast, specifically Goa and Kerala, are home to the majority of spice plantations in the country.

The Evolution of Spices

Many Indian spices now have a GI (Geographical Indication) tag – a sign given to a product that has a specific geographical origin, possessing the qualities, characteristics or reputation of that particular region. There are 26 such tags on the spices grown in India. India is still the topmost producer of spices in the world accounting for over 43% of the spice trade, marching towards becoming a global power with spices as an integral element of the country’s identity. We know the use of spice in food. We know its use in medicine. We know it has been used for preservation. But how many of us realise its use in beverages? The use of spice is centuries-old even in the creation of alcohol. Spirits like Gin rely heavily on different spices and botanicals for their distinctive flavour. Vermouth is wine enriched with spices and alcohol to increase shelf life. Bitters, a tiny yet integral part of cocktail making, is made with a blend of spices, herbs and botanicals so strong that only a few drops are used at a time. Cinnamon and nutmeg are popular choices in the making of spiced liqueurs.

It’s no secret that spices and botanicals have a long history with our liquor cabinet. In fact, with regard to cocktail making, it is said that one of the earliest ‘mixed drinks’ was ‘punch’ and it is believed to have originated in India. With its history dating back to the 17th century, although details of its invention are unknown, the punch has been crowned as ‘the monarch of mixed drinks’ by reputed drinks historian David Wondrich. It is said to have been coined from the Sanskrit word ‘paanch’ which means five since the cocktail typically comprised five elements – a balance of alcohol, citrus, sugar, water and spice. Some stories say it was the royals of that time who invented this community-style drink to prevent poisoning, a common method at the time to assassinate rulers. Another story dictates that it was the sailors of the East India Company who popularised this drink as it didn’t spoil as easily because of the addition of citrus, sugar and spirit.

Modern Day Use of Spices

In modern-day India, spices are re-appearing on the menus of popular bars around the country. The current generation is looking inwards, searching for interesting native produce and somewhat forgotten ingredients to concoct innovative drinks. Varun Sharma, who heads beverages at Comorin (Gurgaon), is making interesting cocktails as well as non-alcoholic blends with ingredients like Khus Grass and Anant mool or sarsaparilla – a woody aromatic root. He can also be found, at any given time, excited to have you taste his new mixes while also allowing guests to play with spices to create their gin mixes. Ankush Gamre, Bar Head at Masque (Mumbai), focuses on the restaurant’s concept of farm to table to create farm to glass cocktails with mango ginger (a rhizome that smells and tastes like raw mango + ginger) and Pathar ka phool or Stone flower (lichen that grows on rocks). Kshitij Goel, Beverage Head at W Hotel, Goa, works with local ingredients like Kokum (dried cover of mangosteen) to make drinks in sync with the vibe of the beachside hotel. Navjot and his team at Lair (Delhi) serve a fresh, tangy, spicy drink called B Linear that is made with tequila, Kashmiri Paprika Syrup and ananas juice – a crowd-pleaser. Tanka Gurung of the iconic speakeasy bar, PCO (Delhi), uses carrom leaves in the new Mood cocktail menu. Sahil Negi of Mr Hoots (Delhi) created his signature cocktail ‘#5’ with Palo Santu. Akhilesh Sheoran uses Bhoot Jolokia paprika and Lakadong turmeric in the menu at the newly opened Tangra Project in Delhi. Bartenders in India are not the only ones using spices. The new emerging Gin brands also use spices and botanicals grown in India to make their product stand out. With a plethora of innovations from all over the country, there is no doubt about world domination of the Indian spices in the near future. ———— The views and opinions expressed in this article are those of the author and do not necessarily reflect those of Freepour.