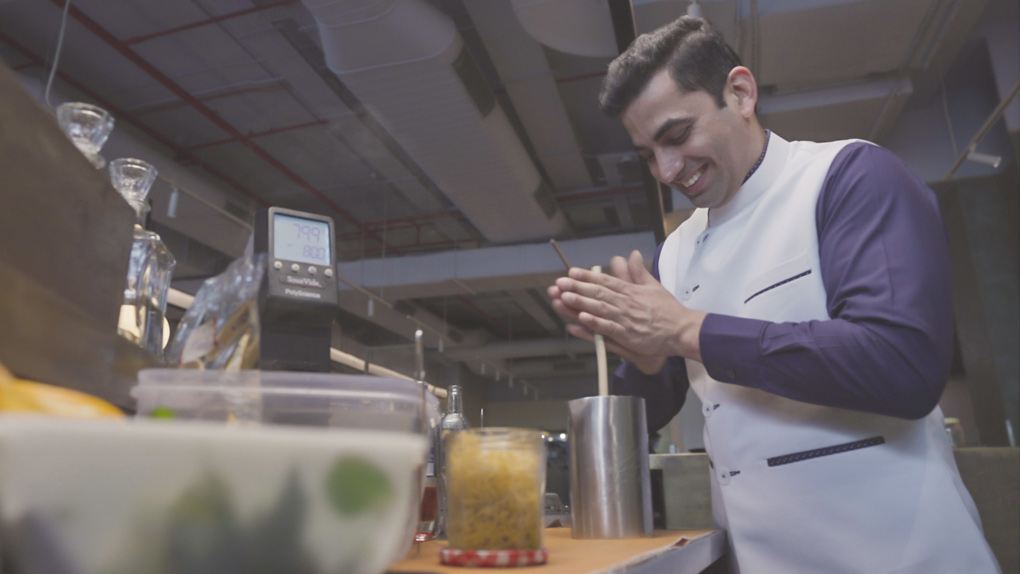 India’s contributions to the beverage world are well documented. To start with Punch, a drink that owes its origins to the Hindi word Paanch, due to its signature 5 ingredients (lime, a sweetener, alcohol, water and spices) and the desperation of British sailors for a drink when their beer spoiled as they voyaged into India and Indonesia. IPA or India Pale Ale is also a drink we owe directly to British India, as it emerged as a beer style that could safely make the 18,000-mile sea voyage to India without spoiling, and give succour to British garrisons. And of course, there’s the G&T, which as the legend goes, originated as a means to make quinine more palatable as a malaria drug. What’s probably not so well known is that many cocktail techniques and trends that are in vogue in the world’s as well as India’s leading cocktail bars, can find their parallels in many age-old Indian culinary practices. Here’s a look at some of these.

From degree coffee to the long throw

Robert Hospet, Bangalore based Beverage Manager for multiple bars is an ‘accidental bartender’ who began his life in the F&B industry as a Butler, serving dignitaries. During this time, he took an interest in bartending. The techniques and practices that he uses now are inspired by, among others, the sound and smell of the streets he grew up on in South India’s Bengaluru and his mother’s kitchen. He has vivid memories of the traditional long pour or throw – a technique that is still being followed on the streets for making a cup of coffee. Coffee, when made in this style in South India, is also known as degree coffee. He asserts that in the quest for modernity, we’re forgetting the fundamentals, and these simple, old ways of working are sometimes the best.

The Blue Blazer, a cocktail described in Jerry Thomas Cocktail Book, of course, comes to mind as one that quite mimics these traditional coffee making rituals, except that in this case, the liquid is aflame. Robert turns to the traditional Indian drink of Nimbu Paani as an example of how throwing a drink helps change its texture by opening up the citrus elements. A long throw works even better, he says, for a cocktail as it helps the potent liquid open up and change the overall texture of the drink itself.

Drink a martini cocktail made using a long throw and then one that is traditionally stirred or shaken, and taste the difference. Even if you can’t catch these subtleties in taste, the visual theatre of Robert doing the long throw, more than compensates. In fact, his words take me back to a magical experience at London’s Connaught Bar (judged the World’s Best Bar in 2021) a few years ago, where a martini cocktail trolley was rolled to our table and after we carefully chose our ingredients, the bartender went through his own table-side ritual and long poured the drink. Little did our grandmothers know that when they were making coffee in the kitchen the old way, it would be a technique that would captivate consumers in the World’s Best Bar a century later.

Winter is coming.. and we’re ready

Grandma always knows best though, especially when it comes to age-old recipes and concoctions for cough, fever and the seasonal flu. And there is nothing more popular than Kadha – a traditional Indian hot drink made with herbs and spices like basil, ginger, cloves, cardamom and black pepper, amongst others. It is loaded with antioxidants and is believed to have anti-inflammatory and antiseptic properties. Mulled wine is a close parallel to the Kadha, except it is an alcoholic version of the same, and just the beverage we need for the bitter winter that’s on us in North India.

It’s not just concoctions where we can find these parallels, but also in some of the equipment that we use in the kitchen. For instance, most Indian kitchens would be incomplete without the stick that’s used for making lassi or buttermilk with a smooth churning action. Similar to that is a stick we use in the bar known as the swizzle stick that gently mixes cocktail ingredients. Traditional swizzle sticks are made from the wood of a particular tree found in the West Indies and are definitely collector’s items. At Delhi’s PCO, a trendsetting cocktail bar, you’d find bartender Tanka Gurung using one to mix up certain cocktails including the tequila-based cocktail called KTM. Maybe we can convince them to switch over to the Indian version!

And while talking about the Indian kitchen, one ingredient you’d always find is oil. But the use of vegetable oils in drinks is a comparatively newer trend in bars in the UK and US. What is definitely more common as a technique, though, is fat washing – an ingenious way to lend some extra flavour to your drink, typically savoury. Add a liquid to a spirit and let it sit at room temperature for a while. Then keep it in your freezer till the fat solidifies and can be skimmed off, leaving behind the underlying flavour of the original ingredient you added to the spirit. And this is where Indian ingenuity adds a familiar taste to a cocktail that people love and hate in equal measure. As someone once said, you only start liking a Negroni after the third one. Growing up in Italy you get used to bitter tastes, which is why drinks like the Negroni are taken in their stride. But a cocktail like the Negroni can be a shock to an initiate in the cocktail world. Varun Sharma, the Beverage Manager at Comorin, decided to find a remedy for this and uses coconut oil to fat wash his Italian bitter. He uses that fat washed spirit for his Negroni making it a compelling cocktail for someone to ease their path into a Negroni.

If the Negroni is all about taste, then in the world of cocktails, there are other senses that come into play, as ace mixologists try to ensure that they can titillate all the senses. And to add a sense of intrigue while also bringing your sense of smell into play, smoking is one weapon that bartenders world-over have in their arsenal. In India too, having judged a number of cocktail competitions, it would be hard to remember one without the obligatory mason jar covering the smoke-filled cocktail glass, and the jar whipped off in a flourish to give jury members the full benefit of the flavour of the smoke. It’s not just about adding a visual appeal to a cocktail but complementing the base spirit or the flavour profile of the cocktail. The methods are many! The more common one is a smoking gun that uses different types of woods to smoke the cocktail or enflame a herb/spice.

But when in India, why use a gun when we have the tandoor? It is a cooking technique that uses fire and smoke and supposedly dates back to 2600 BC (There are tandoor remains dating back from then, discovered by archaeologists in what is now the state of Rajasthan.

And with the tandoor as inspiration and technique, Delhi’s Santanu Chanda, Beverage Director at Home created a drink called Coal and Clay, or a martini with a difference. To make this, he smokes potato skin in the tandoor and then infuses his Vermouth with it. Beeswax Vodka and Mushroom tincture make up the rest of the cocktail. After being created, the drink is rested in a clay jar and then served up in a nude coupette glass with a piece of dehydrated shitake mushroom as garnish. Santanu describes the taste as earthy and umami. He says it is reminiscent of traditional times when liquids were stored in clay jars, giving them this soil and earthy taste.

Clay jars like the above ones, but much larger are also traditionally used for storing the pickles that most Indian homes, would traditionally make. Our age-old methods of preservation, including those used for making pickles, are now in vogue with new-age bartenders both internationally and in India. New Delhi’s Home has a brand-new menu titled ‘Fermentation and the Solar System’, to pay tribute to our planetary system and these methods of preservation, all in one fell swoop.

Lacto fermentation is a common form of fermentation used for making pickles in India. The addition of salt to the fruit and then sealing it in airtight jars for a period of time leads to the creation of lactic acid, giving it a sour and tangy taste. It’s also all the rage in the West from Rene Redzepi’s Noma to London’s White Lyan. The cocktail at home is called G2V, as a tribute to the sun that is known as a G2V star, The ingredients, Bee pollen tincture, Burnt Butter Bourbon distillate, Cactus Cordial and a Lacto fermented Pear are therefore appropriately linked to the sun, the desert, water and the mountains. Salt is added to baby pears, thereafter they are sealed in vacuum bags and kept for a week. Brine is also a byproduct of this process, that can be further used for Gibsons or savoury Martinis. The pear at the end of this process has a fruity and sour taste and is used as a garnish for the drink. Using fermented ingredients in the drink itself might lead to an overpowering taste for the consumer, Santanu feels. I truly feel that we haven’t scratched the surface when it comes to finding these parallels. And as ace Indian bartenders, start collaborating closer with Chefs, as also digging deeper into our own culinary heritage and practices, there are more such cocktails on the menu that will find this inspiration. There’s no reason why also to showcase one of these practices/techniques as say the Indian equivalent of the Japanese hard shake for example.